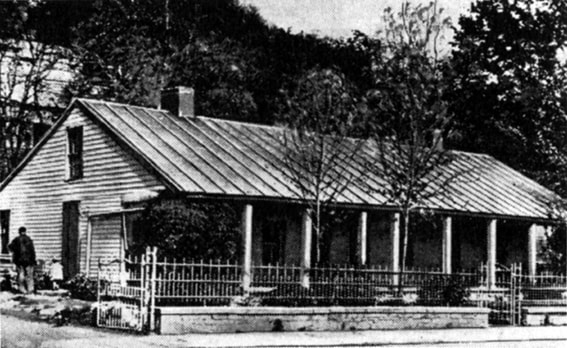 Creole House from the WPA Historic American Buildings Survey
South of East St. Louis, on that fertile Mississippi River plain known as the American Bottom, lies the quiet, ancient little town of Prairie du Rocher, or "Rock Prairie." Nestling at the base of a great limestone cliff, this town is one of the oldest in Illinois, having been founded about 1722 by French colonists. These colonists had been left stranded in the Mississippi Valley when John Law's great development project, the "Mississippi Bubble," burst with a roar heard on two continents.

Among the venerable houses and cottages of Prairie du Rocher, one of the most unusual, both architecturally and historically, is a long, low, French colonial style dwelling known as the Creole House. Along with numerous other historic Illinois landmarks, this house was drawn and photographed by draftsmen of the WPA architects' project assigned to the Historic American Buildings Survey. These drawings have been placed in Library of Congress, the Burnham Library of the Chicago Art Institute and the architectural library of the University of Illinois.

Although the draftsmen were mainly concerned with the architecture of Creole House, since it represents a type that prevailed in southern Illinois during early days, historians have found its story of wider interest than its architecture. For it is associated with several men who once attracted national attention, and in recent years it was the home of a lineal descendant of the French colonist who founded Prairie du Rocher more than two hundred years ago.

This house, however, does not date from the French colonial days of Prairie du Rocher, even though its architecture is of that period. Instead, investigation discloses that the dwelling was built about 1800, when the Illinois country was part of the newly-organized Indiana Territory and Kentuckians and others of Anglo-Saxon stock began to settle among the French in Prairie du Rocher.

Originally, Creole House was a one-family dwelling built of logs, set vertically, or in what is known as the "French-Canadian" style. In 1858, the house was enlarged by the addition of a north wing of frame construction and the whole was covered with siding. This made it, in reality, a double house. Today, it presents the appearance of a long, squat, frame abode, its low-pitched roof extending outward to form a porch the entire length of the house.

"We have never been able to determine who first built the house," said Thomas J. Conner, leading merchant of Prairie du Rocher, local historian, and descendant of an early settler. "According to one version, it was built by a Dr. Hill and another says that it was first erected by a Dr. MacDonald."

About 1830 the house was acquired by William Henry, who a few years later set up a flour mill at Prairie du Rocher. Then, in 1846, Henry's daughter, Marie Josephine, was married to Abraham H. Lee — who was subsequently to attain national prominence in an unusual way. At the time of his marriage, Lee conducted a commission house in St. Louis. Two years later, Mr. and Mrs. Lee acquired the log house in Prairie du Rocher.

"We must now drop the Lees for a moment and turn our attention to a family which rented the log house at this time," explained Mr. Conner. "This family was headed by Elias C. Hansbrough, a storekeeper of the village. In the log house a son was born to the Hansbroughs in 1848. This son was Henry Clay Hansbrough, who in his mature life became one of the political leaders of North Dakota, its first congressman, and afterward a senator from that state for eighteen years. He was sometimes called the 'father' of irrigation in the United States. For many years he was a national figure in liberal Republican politics and continued active until his death in 1933."

We are told that about 1855 or 1856 the log house came into the possession of Franklin Brickey, who was an associate of Abraham Lee in the operation of a large flour mill on the site of the original Henry mill. It was Brickey who built the north half to the log house and added siding to the entire structure. He was afterward to become president of the town board of trustees. "The most important factor in the prosperity of the village [of Prairie du Rocher] is the mill of Franklin Brickey," says a Randolph County history published in the 1880's.

It was in the year 1867 that the former owner of the log house, Abraham Lee, found himself in the national spotlight. In January of that year he was announced as the winner of a sensational lottery, nationwide in scope, which offered the imposing Crosby Opera House in Chicago as its premium. The opera house cost $600,000 to build. The lottery project was resorted to when its owner got into financial difficulties. Tickets were sold at $5.00 each. After being notified in his Prairie du Rocher home that he was the winner, Abraham Lee promptly sold the opera house back to its original owner and received $200,000 for it.

His worldly position thus enhanced, Lee built a stately mansion on a tract of land just north of Creole House and this has been a show place of Prairie du Rocher for years.

Since its enlargement, Creole House has been a double-family dwelling. After Franklin Brickey moved elsewhere, it was occupied by his son, John. The house is still owned by the Brickey estate. Surrounded by an old-fashioned cast-iron fence and shaded by several ancient maples, Creole House, with its gable roof and long, low, Southern style porch, stands as a picturesque reminder of the town's early days. Its interior walls are of plaster and the rooms are simple in design. Fireplaces, with wooden mantels, adorn the living rooms.

In the recent past, part of this house was occupied by Matthew Langlois and his family. He is a lineal descendant of Jean St. Thérèse Langlois, founder of Prairie du Rocher. Jean St. Thérèse was a nephew of Pierre Duqué Boisbriant, commandant and builder of Fort Chartres. This French stronghold has been partially restored and is now a state park and one of Illinois' most revered historic shrines.

An interesting sidelight on the United States senator who was born in Creole house is that, upon being elected to his first office, that of congressman for North Dakota, he fostered an anti-lottery bill which became a law. Although this bill was aimed specifically at the Louisiana lottery,a some students wonder if it had its origin in the sensational lottery of the Crosby opera house in Chicago. At the time of the opera house lottery, Senator Hansbrough was a shrewd, observing, idealistic young man of nineteen.
Courtesy of the Illinois State Historical Society 1941 publication